Indigenous Wabanaki people have been living continuously in my part of the world on the east coast of Canada for over 12,000 years. I’ve written that fact in stories, repeated it in presentations and read it on plaques multiple times – but it wasn’t until I was working on a book about the Wolostoq/St. John River a few years ago that I gained an appreciation of what that really means. I was on the phone with Molly Demma of the St. John River Society talking about the history of the river. She mentioned that oft-repeated fact and added; ‘you know the pyramids are only about 5,000 years old.’

Our new world isn’t that new at all.

Which brings us to Chapter 8 of our deep change story. In order for us to make the shifts we to survive and thrive in the emerging knowledge age, we are going to have to shift our perspectives on a number of long-held beliefs, theories and ways of doing things. That can be hard – or at least that’s the story we tell ourselves. People don’t want to change; we’re stuck in our ways. That’s true but it’s also true that we spend our lives changing, growing, moving and adapting to little changes here and there. One more example of that ‘and/and’ dynamic Alaina and I talk about on the podcast.

In this episode, we talk to two people who are experts at showing others how to see our world in a different light. Mi’kmaq astronomer Hilding Neilson (aka @astrocanuck) is an assistant professor at the University of Toronto who works at the intersection of science, astronomy and Indigenous knowledge. He talks with us about Indigenous star stories, what they tell us about this part of the world, the movement to elevate and teach the stories that are indigenous to our shared Canadian landscape, how astronomy is a gateway for Indigenous kids into the sciences and he tells us the Mi’kmaq story of Bear, Robin, Chickadee, Gray Jay, Pigeon, Blue Jay and Owl for the constellation most of us know as the Big Dipper. I read about Hilding in The Walrus story ‘Teaching Indigenous Star Stories’, I encourage you to give it a read.

Then we sit down with my good friend Elizabeth Weir. While most people in New Brunswick know her best as the former leader of the provincial New Democratic Party (NDP), she’s been busy for over a decade working with the National Democratic Institute (NDI), the UN, the European Union and the World Bank, flying around the world working to strengthen and support emerging democracies in countries such as Nepal (she was there for the earthquake), Libya, Algeria, Tunisia, Myanmar, Fiji and most recently the Tibetan Parliament in exile. 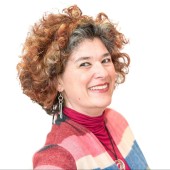 And Here we Go! Alaina and Lisa Start a Podcast